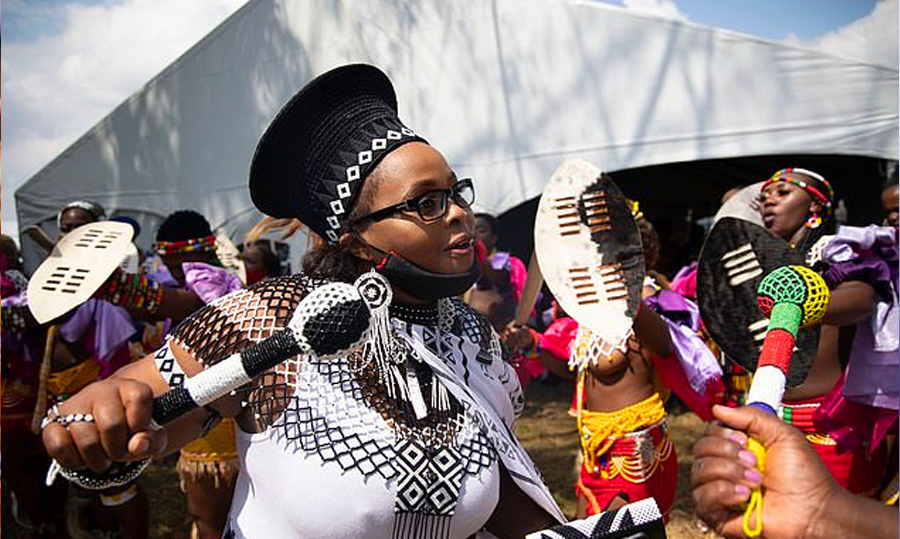 South Africa’s Zulu queen died suddenly today just weeks after she was made regent when her husband King Goodwill Zwelithini passed away, forcing officials to deny rumours she was poisoned.

Queen Mantfombi, 65, became the interim leader of the ethnic group after her husband’s send off last month.

Traditional Prime Minister to the Zulu monarch Mangosuthu Buthelezi, 92, said: ‘It is with the deepest shock and distress that the Royal Family announces the unexpected passing of Her Majesty Queen Shiyiwe Mantfombi Dlamini Zulu, Regent of the Zulu Nation’.

He has dismissed rumours that the queen had been poisoned, but promised to provide more details on the cause of death.

‘This has taken us by surprise and left us utterly bereft,’ he said.

The Queen is the third senior Zulu royal to be buried in recent months following the death of Zwelithini’s eldest son in November, and his own death in March.

Queen Mantfombi, 65,  died suddenly today just weeks after she was made regent when her husband King Goodwill Zwelithini passed away

King Zwelithini left behind six wives (pictured in shrouds at his memorial service on March 18), 28 children and a thorny question on succession

The 92-year-old prime minster had raged against the royal family in the days before the queen’s death.

He denounced Zwelithini’s siblings Prince Mbonisi and Princess Thembi for taking part in ‘mischievous, parallel meetings’ on the subject of who would assist Queen Mantfombi in her duties.

In a statement cited by the Times, he said:  ‘It appears that such action seeks to torpedo His Majesty the King’s own wishes and arrangements’.

Queen Mantfombi was admitted to hospital last week, exactly a month after she was elected regent, and only weeks after her husband’s death.

A woman leads Zulu maidens in dance during the memorial of King Goodwill Zwelithini at the KwaKhethomthandayo royal palace in Nongoma, South Africa, on March 18

They stopped for a brief vigil outside the town hall where they were joined by locals, some still in their work uniforms

Charlene of Monaco looks on during the memorial for the late Zulu monarch, King Goodwill Zwelithini at the KwaKhethomthandayo Royal Palace in Nongoma

Zwelithini passed away on March 12, aged 72 after half a century on the throne, following a battle with diabetes-related illness.

Although the title of Zulu King does not bestow executive power, the charismatic Zwelithini had moral influence over more than 11 million Zulus, nearly a fifth of South Africa’s population.

As the most influential of traditional leaders, he advised legislators and met with powerful politicians throughout his rule.

He left behind six wives, 28 children and a thorny question on succession.

Although she was Zwelithini’s third wife, Dlamini-Zulu held the title of ‘great queen’ – a status determined by her dowry. She was the sister of Eswatini’s King Mswati III.

She leaves behind eight children, including five sons, who she had with Zwelithini.

Some speculated that her eldest son, Prince Misuzulu Zulu, 46 – whose name can be loosely translated as ‘strengthening the Zulus’ – could be heir to the throne.

She was elected regent on March 24 for a three-month mourning period before the next monarch is named.

Buthelezi on Thursday assured that while the royal household was grief-stricken, ‘there will be no leadership vacuum in the Zulu nation.’

President Cyril Ramaphosa overnight expressed deep condolences to the royal house saying South Africa was standing by the family ‘in this hour of compounded grief.’

‘We extend our thoughts, prayers and hearts once more to the Royal Family who, in the midst of mourning the passing of the beloved King, are now called upon to bid farewell to the Regent in sadly short succession.’