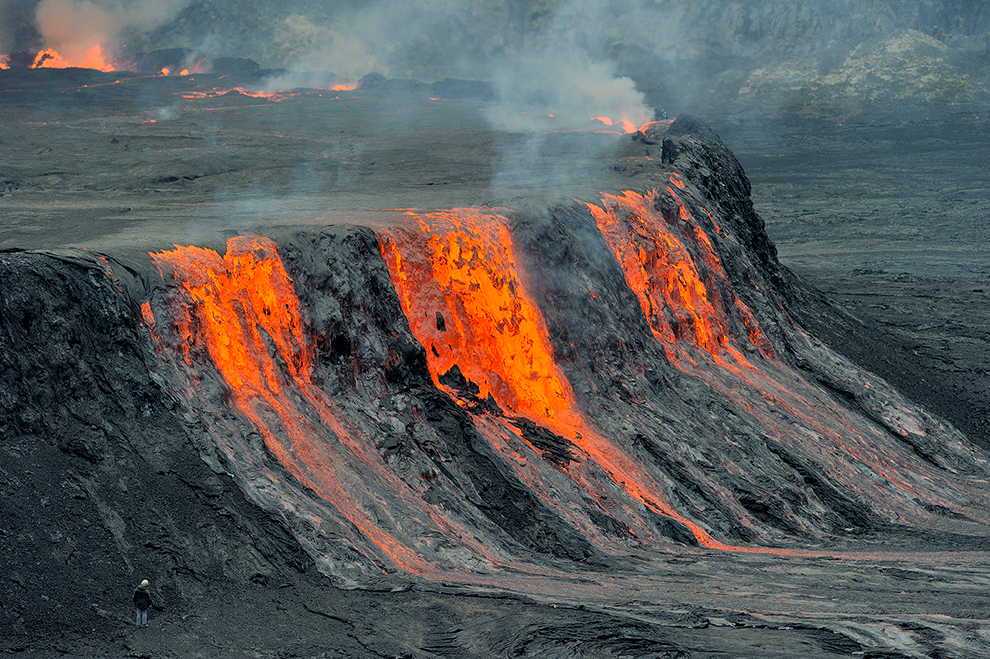 A river of flaming lava that poured out of the erupting Nyiragongo volcano in the Democratic Republic of the Congo has reached the suburbs of Goma, an eastern city of nearly 2 million people.

Officials said on Sunday that the molten stream had reached the airport on the outskirts of the city, but witnesses said the flow appeared to have halted later in the morning.

The government activated an evacuation plan for Goma on Saturday night, as Nyiragongo erupted for the first time since 2002, an event that killed hundreds of people and left 120,000 homeless.

Even before the official announcement on Saturday, thousands of people had started filling the streets and carrying what they could as they headed out of the border city.

Early on Sunday morning, around a dozen earth tremors were felt in Goma. “People are beginning to return to their homes. The situation seems to have calmed down for the moment,” one resident said.

“But people are still scared. The authorities still haven’t made any official announcement so far this morning,” he added.

Officials said the lava had reached Goma city airport – located on the outskirts of the metropolis on the shores of Lake Kivu – although residents said it had stopped at the edge of the facility.

“The situation is deteriorating,” an official from Virunga National Park, where the volcano is located, told his staff in a memo.

The official said on Sunday that “the flow is also descending on the town. It has now reached the airport,” adding the lava was likely to reach the shores of Lake Kivu.

“The eruption of Nyiragongo is similar to the eruption in 2002,” he said, asking all residents near the airport to evacuate without delay. At this stage, he said, “the other districts of the city were not in danger” as the lava was unlikely to reach those areas.

The communications minister, Patrick Muyaya, had earlier tweeted: “The evacuation plan for the city of Goma has been activated … The government is discussing the urgent measures to take at present.”

Muyaya added that the plan was activated after an emergency meeting of the government. Congolese president Felix Tshisekedi said he would be returning home from Europe on Sunday to help coordinate relief efforts.

There was no immediate word on any casualties, but witnesses said that lava had engulfed one highway that connects Goma with the city of Beni in North Kivu province.

The exodus from the city began earlier on Saturday even before the Nyiragongo volcano erupted, spewing red fumes into the night sky.

Power was cut in large parts of the city and hundreds of residents began leaving their homes and heading towards the nearby border with Rwanda.

Rwandan immigration authorities reported that some 3,000 people already had officially crossed over from Congo to escape the volcano’s eruption, according to the national broadcaster.

The UN peacekeeping mission known as Monusco tweeted dramatic footage of the city, saying it was conducting reconnaissance flights over Goma, where it maintains a large base.

“The sky has turned red,” said one resident, Carine Mbala. “There is a smell of sulphur. In the distance you can see giant flames coming out of the mountain. But there has not been any earthquake.”

“People are leaving or preparing to leave,” another Goma resident said, as the streets began filling up, some people carrying as many of their belongings as they could.

“I am taking the children and getting into the car. There is a risk that the lava will flow on Goma,” another said.

Some sought refuge aboard boats on Lake Kivu, while others fled to Mount Goma, the highest point in the metropolitan area. Dorcas Mbulayi left her home about an hour after the volcano first showed signs of erupting.

“We were eating when a friend of dad’s called him on the phone and told him to go and look outside,” said Mbulayi, who was still a child the last time the volcano erupted. “Dad told us that the volcano was erupting and that we were going to go to Mount Goma to escape the lava of the volcano.”

She also blamed authorities “for not informing us in time about the possible volcanic eruption”.

The lack of immediate announcements from authorities and conflicting accounts circulating on social media only added to the sense of chaos in Goma.

Authorities at the Goma Volcano Observatory initially said it was the nearby Nyamulagira volcano that had erupted. The two volcanos are located about 13km (8.1 miles) apart.

Goma sits along the border between Congo and neighboring Rwanda, and is a regional hub for many humanitarian agencies in the region.

The Goma region, which lies in North Kivu province, bordering Rwanda and Uganda, has six volcanoes, all higher than 3,000 metres. The deadliest eruption of Nyiragongo was in 1977, when more than 600 died.